Bonnie's life before she meet Clyde﻿ 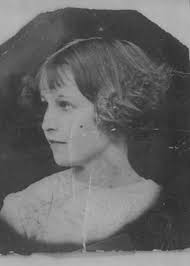 Bonnie's school photo.
On October 1st, 1910 Bonnie Elizabeth Parker was born in Rowena Texas. Bonnie was the second of three children to Charlie and Emma Parker. She had a older brother and a younger sister. Her father Henry was a bricklayer, and when she was four he died unexpectedly. After her father's death her mother moved the family to a suburb of Dallas known as Cement City. When Bonnie was younger she wanted to be a singer, an actress, or a writer. She was 4 foot, 10 inches, and 85 pounds. Bonnie was a good student and did well in school, but she was soon bored with her average life.

In high school she won top prizes in spelling, writing, and public speaking. In her second year in high-school when she was 15 she met Roy Thornton and they fell in love. Bonnie - at 16- and Roy dropped out of school and were married on September 25, 1926. After she married Roy, Bonnie got a tattoo above her right knee on her thigh, of double hearts that contain both their names.


Roy was a criminal at heart and would leave Bonnie on her own for weeks at a time. During the times Roy had left Bonnie had gotten a job as a waitress, so she could survive. Bonnie kept a diary when she was with Roy. A couple of days before New Years Eve Bonnie wrote, that if Roy wasn't back by New Years Eve she was done. This was the third time he had left her and she had, had enough, and she kicked him out. Bonnie never saw Roy again. Roy and Bonnie never got divorced, and she never took off her wedding ring.

Bonnie worked at Marco's Cafe as a waitress. One of Bonnie's customers was Ted Hinton, a childhood friend. Ted Hinton was a police officer. Because of her good looks, many of the male customers would flirt with her. Hinton was always gentlemanly and treated Bonnie with respect. Hinton admitted in a later Biography that he had a crush on Bonnie, which made it difficult for him as one of the men on the team sent to kill her and her lover, Clyde. Bonnie lost her job in 1929 when the Great Depression started.