Clyde's life before he met Bonnie 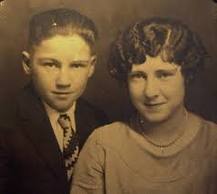 Clyde and his Sister Marie
On March 24th, 1909 Clyde Chestnut Barrow was born in Ellis County, Texas. Clyde was the fifth of seven children to Henry and Cumie Barrow.
Clyde was closest to his older brother Marvin Barrow "Buck". As a child Clyde's parents were farmers and often didn't have enough money to feed their children. When Clyde was nine he got severely sick, and almost died. His family gave up farming when Clyde was twelve, and moved to West Dallas. There his father opened up a service station. When Clyde wasn't stealing or helping his dad, he loved to play his saxophone.

When Clyde was twelve he also dropped out of school, and joined his brother Buck in stealing. One of the first things Clyde stole was a turkey. Clyde was soon stealing more than just turkeys, he started stealing cars. Clyde and Buck were always getting into trouble with the law, stealing cars, and turkeys around their neighborhood.

As a teenager, Clyde attempted to enlist in the U.S Navy, but because of lingering effects from a serious illness when he was a boy, it was possibly malaria or yellow fever, resulted in his medical rejection. It was devastating for Clyde, who had already tattooed "USN" on his left arm.

In 1926 Clyde was first arrested for automobile theft after falling to return a car he had rented in Dallas to visit an estranged high school girlfriend. The rental car agency dropped the charges, but the incident remained on his arrest record. Clyde had two serious girlfriends (Anne and Gladys) before he met Bonnie, but he never married.

On October 16, 1929 he was arrested with William Turner and Frank Hardy at the Roosevelt Hotel in Waco, Texas. He told the Chief of Police, Hollis Barron, through a stream of tears that the two men had picked him up hitchhiking and he was unaware of their reputations. Barron let him go. That was one of the last breaks Clyde Barrow got.