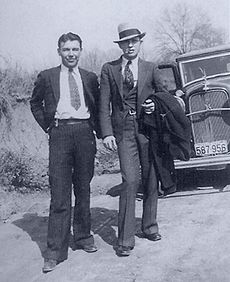 For W.D Jones it all started in Temple, Texas on Christmas Day, 1932. When he had seen Clyde kill Doyle Johnson. "Boy, you can't go home. You got murder on you, just like me." Thats what Clyde had told W.D Jones. In W.D Jones own words. "I had got with Clyde and Bonnie the night before in Dallas. Me and L. C., that's Clyde's younger brother, was driving home from a dance in his daddy's old car. Here come Bonnie and Clyde. They honked their car horn and we pulled over. I stayed in the car. L. C. got out and went back to see what they wanted. Then he hollered at me, "Hey, come on back. Clyde wants to talk to you." Clyde was wanted then for murder and kidnaping, but I had knowed him all my life. So I got out and went to his car."

Before W.D joined the gang he didn't even own a pair of shoes, but after he joined he had nice suits, shoes and cigars. W.D idolized Bonnie and Clyde and got a thrill from being with them.

In cartoons, pulp detective magazines, newsreels, and newspapers, Bonnie was often portrayed as being a machine gun toting killer. Yet W.D Jones couldn't remember a time when she ever fired at any police officers.

Clyde was a control freak so he decided where the gang would go and when they would go there. Clyde stated that he would rather die than go back to Eastham. "No man but the undertaker will ever get me, if officers ever cripple me to where I see they will take me alive, I'll take my own life." Bonnie -madly in love with Clyde- agreed to go wherever Clyde went. Bonnie stated, "Never go crooked. It's for the love of a man that I'm gonna have to die. I don't know when, but I know it can't be long."

Even though it was dangerous Bonnie and Clyde made sure to see their family and stay in touch. Clyde once told his family that he would rather run than fight. To get in contact Bonnie and Clyde would speed past their family's house and throw a bottle out the window with a note in it to tell their family where to meet them. They would also call sometimes, but the police hacked into their families phones, and wrote down everything they heard, which included the next place the families would meet. The police set up a ambush that failed. 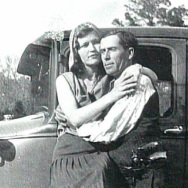 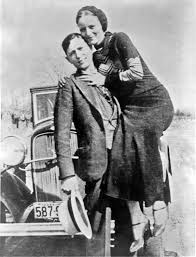