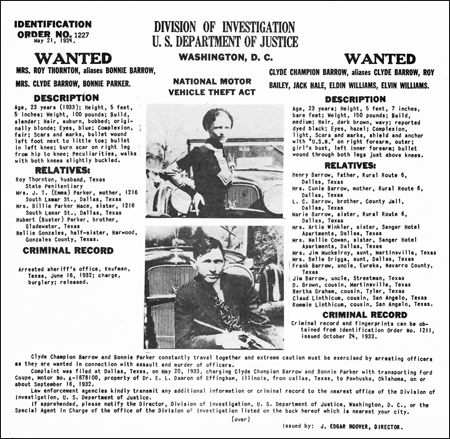 Over the next two years Bonnie and Clyde drove across Texas, Oklahoma, Missouri, Louisiana and New Mexico robbing stores and committing murder. The gang had took place in about 100 robberies. Bonnie and Clyde are remembered most for their bigger robberies, but majority of the time they robbed gas stations and small rural grocery stores. Often, these sorts of robberies were barely enough to finance their lifestyles until their next robbery. They stayed close to the border to easily get away, because at the time police couldn't cross state borders to arrest a criminal. The police made Bonnie and Clyde their top priority.

Bonnie wasn't all for killing the law so she convinced Clyde to "kidnap" police officers. They would often put them in the trunk of the car and drive to a different state, give the officer money to get back and leave them.

The gang didn't get rich through their criminal activities, though their robberies of banks did enrich their coffers and add to their fame. Fame was what they were looking for, and Bonnie and Clyde wanted to make a good impression by their appearance. Clyde would go through great lengths to get regular haircuts, and they both dressed in stylish clothes.

Bonnie and Clyde wanted to always be one step ahead of the police so they were always stealing new cars, military weapons, and kept a heavy stock of licence plates. They stole licence plates so the cops couldn't idenify them by their licence plate. Clyde considered himself a good driver and would drive up to one thousand miles in a twenty four hour period.