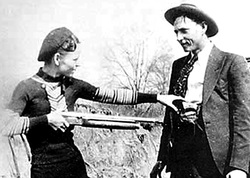 In January 1930, Bonnie and Clyde met at a friends house, Clyde's ex girlfriend and Bonnie's friends house. There was an instant spark between them. They were inseparable until Clyde was arrested. A few weeks after they met, Clyde was sentenced to two years in prison for past crimes. Bonnie was depressed when he was arrested. Clyde was unhappy in jail and wrote to Bonnie asking her to smuggle him a gun. Bonnie snuck into the jail and gave Clyde a gun.  On March 11, 1930 Clyde escaped from jail using the gun Bonnie had smuggled him. That was the beginning of her life of crime. A week later he was caught and was sentenced 14 years in Eastham Prison Farm near Weldon, Texas.

On April 21, 1930, Clyde only 21, arrived at Eastham. Life in Eastham was unbearable for Clyde and most of the prisoners, some even chose suicide rather than live another day in Eastham. To commit suicide in Eastham the prisoners would run out in front of the guards and be rained on by bullets. It was in Eastham that Clyde killed his first person. Ed Crower a inmate well known to rape and beat fellow inmates, beat and raped Clyde repeatedly. Finally Clyde had, had enough and well Ed Crower was in the bathroom Clyde snuck up with a lead pipe and smashed it into Crower's head.

Even with Crower gone, life was still unbearable for Clyde and he became desperate to get out. Hoping that if he was physically incapacitated he might get transferred off of Eastham farm, so he asked a fellow prisoner to chop off some of his toes with an axe. The prisoner agreed and while chopping wood the prisoner "accidentally" cut off two of Clyde's toes. After two long years in Eastham Clyde finally got out. When Clyde got out of Eastham he found out that his mother had been writing to the governor and that he was about to let Clyde go, and that he had cut off his toes for nothing.